region: extreme South
vehicle: car
length: 1 or 2 hours
season: all the year
suggested to be visited jointly with Cantanhez


A visit to the Guinea Bissau independence Museum, located into the former barracks of the Portuguese Army. 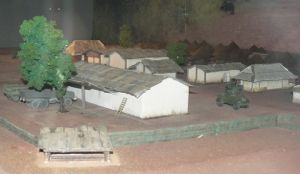 The Museum of Guieldje is along the road to Chantanhez, about 30 km from the Park center.
It opened in March 2013, and was formerly home to the Portuguese headquarters during the colonial times.
It's made up of two buildings, one with exhibits of war finds dating back to the Portuguese army and the liberation front, while the other displays the ecosystem and the way of life and culture of the ethnics groups living in the south of the country.

On the outside, cannons and other heavy weapons used during the war of independence are on display.
The chapel was also rebuilt.

The first building is of particular interest, with exhibits of weapons, munitions, radios, military uniforms, photographic documents, maps, written texts, videos, personal letters of fighters, and a relief map of the sight during the last clashes.

It is inspiring to hear the recount of the events from the voice of one of the museum custodians, a former fighter: it is clear from his story how conquering this post, strategic for the Portuguese army, because of its location near the border with Guinea Conakry, changed the fate of the war in favor of the Guineans and was a defining moment for the independence of Guinea.
Therefore, Guiledje is deemed the cradle of the Guinean nation.

The visit can be done in an hour, or in two if you want to deepen your knowledge.
Because of the museum location on the road to Cantanhez Park, the two visits can be combined, you can stop on the way over or on the way back from the Park.