The biggest mangrove park of West Africa, where human life harmonizes perfectly with the ecosystem. Water animals and migratory birds can be seen.

Rio Cacheu is located in the north of the country, near the border with Senegal. It is 150 km long, largely navigable, and its rate increases considerably in the rainy season.
The estuary is fascinating.
Because of the extent of mangrove forest this area has become the Natural Park of the Tarrafes of the Rio Cacheu (Tarrafes = mangroves).
Despite being a very interesting area, it is not very popular among visitors. However it is a safe heaven for many animals: crocodiles, hippopotamuses, dolphins, manatees, spotted gazelles, green macaques and plays host to seasonal birds migration.

To see nature and people

Water and Mangroves
Visitors will come across water and mangroves throughout theirs excursions.
The green of the mangroves and the blue of the river intertwine in a thousand different combinations, sometimes are mirrored display of water between distant banks, other times are intricate meanders, while others the vegetation totally covers secondary branches of the river creating tunnels of mangroves.

People who live on the Rio
Sailing the river in a canoe, you will meet canoes of people who use the river as a way of transportation. You can see women singing while rowing, canoes competing with each other, canoes docked next to huts along the river, entire riverside villages whose life depends on the water.

Migratory birds
There are myriads of birds.
Resident and migratory birds can be seen in the morning and in the evening, large quantity of birds can be watched during migration.
But even during the day, even in the hottest hours, you will always see birds flying or resting on the water or on the roots of the mangroves. 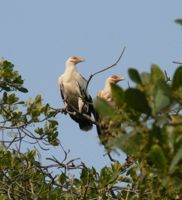 Other animals
More interesting are the water animals that inhabit the river, even if less likely to be seen because they rarely come out into the open and most of the time only when it is dark.
Salt water hippos can be seen here, not only on the island of Orango.
Crocodiles, dolphins and manatees can also be seen, gazelles and monkeys usually hide in the forest.

A swim in the river
Countless arms of the river enter the dryland, mostly edged by mangroves, that rise from the water at high tide and stick out from the silty bottom at low tide. There are also sand banks or sand islets, all within walking distance, where swimming is pleasant.
Crocodiles and other water animals stay usually hidden when they feel human presence, but it is always better to be careful.

Suggested excursions
To reach the suggested locations you need the help of a guide, who will be of assistance for more suitable excursions for your travel needs, giving also advice on events taking place during your visit.
These are some of the places we suggest to visit, starting from São Domingos, all in the area of the Park north of the Rio Cacheu.
Boat trips are also possible starting from Cacheu.
You can see on the map the recommended locations. Download the Park map.

>> The Rio and the mangroves near São Domingos
Half-day walk. From Beguinge (just before São Domingos coming from Bissau) a path stretches between mangroves, arms of the rio and sandbanks. Really beautiful N'onkie beach.

>> Elia
It is a small village surrounded by water, with typical two story huts.
It can be an intermediate stop on the way to Jobel.

>> Jobel, the lakeside village
It is a village on the water, at the western end of the park, deemed by natives as a little Venice, where canoes are used instead of gondolas.
It can be reached by canoe (one day trip, inclusive stay and return) from São Domingos or Cacheu. Or less time (just half a day) by land. Through Elia, then on foot (path through marshes) or by canoe you can reach Jobel.

>> Arame
Just beyond Jobel there is the village of Arame, hippos inhabit the nearby river, which sometimes can be seen late at night.
This visit can be combined with Elijah and Jobel.

>> Botch
Outside the park, west of Suzana, you come across the village of Botch, known for its oyster farms. It is the only place in Guinea (and perhaps in the world) where these varieties of oysters are raised.
Half day by car.

>> Poilão de leão
Located on the eastern side of the Park, it can be reached by land from São Domingos or by sea from Cacheu. Visitors might have a chance to see hippos and elephants in this area.
The inhabitants of Poilão de leão are indigenous to the area of Cobiana's Mato Sagrado, located in the southern part of the park. Crossing the Rio Cacheu by canoe you can reach the villages of Benia, Belimbom, Caame and Peche, where you can visit holy sites and might be able to attend sacred ceremonies too.

With extra time, it can be interesting to visit local fairs, called Lumos, where local arts and craft can be found.

The best known are in São Domingos and in Elia, days of the week varies depending on the felupe(local ethnic group) calendar, or the one in Ingoré (46 km to the East) which is usually held on Wednesdays.

Getting there, lodging and dining

Cacheu and São Domingos are both connected to Bissau by a paved road, public transportation is available. It is advisable to use you own vehicle, to be able to move from the city to the locations you wish to visit.

In São Domingos there are a couple of good hotels, whose managers can also organize visits to the Rio.

In Cacheu, the existing facilities are being renovated.

For lunch there are no problems in either city.

TO BOOK : call or write to the address on the CONTACTS page.