Period: end of November
(ask for dates to the address indicated on page CONTACTS)


A festival that allows you to know the various aspects of the local cuisine in a festive atmosphere very well attended and with the opportunity to view performances and participate in guided visits. 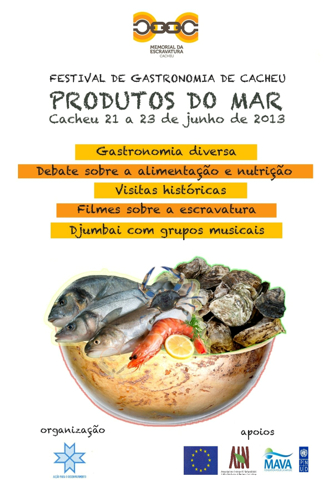 The festival was sponsored by the NGO AD, with the support of the EU and NGOs AIN, MAVA and IUCN.
After the first edition of June 2013 is expected to be repeated every year in the same month.

The purpose is the enhancement of local culture through the promotion of traditional cuisine.
It also want to highlight the richness of the Rio Cacheu and what it has represented in the past for the people of Guinea. During the festival, there are different specific cultural activities with meetings, discussions and exhibitions.

Visiting Cacheu during the Festival, you can visit the location of the memory described on page THE JOURNEY OF SLAVES.

Each year, the gastronomic part of the festival focuses on a different theme: for example the first festival, the 2013 edition of which we report here the program and some photos, had the theme: "sea products".

For more detailed information about the next edition and how to participate, call or write to the address indicated on page CONTACTS.