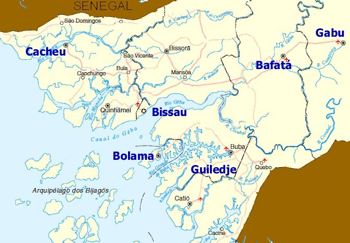 Besides the beauty of its landscape, flora, and fauna, Guinea Bissau holds some precious legacies of the last millennium.
These places today make us think of the interaction, too often a dramatic one, between foreign countries ( both European and African) and local people.
We suggest four tours referring to the corresponding historical times: the slaves’ way; the colonial legacy; the memory of redemption, and modern life.

The journey of slaves 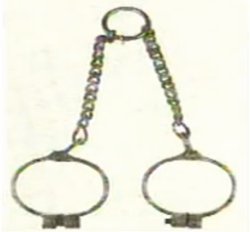 Guinea Bissau, as almost all of African countries, has been subjected to slave trade, with centre in Cacheu, its main port at those times.
Today you can see just a few remainders of that, some beams tied to trees on an island near Cacheu called “Slaves’ island”.
It’s now being created the Memorial of Slavery, at the ancient Gouveia House, built in XVII century in colonial style.
More details at your right in the box THE JOURNEY OF SLAVES.

The colonial legacy
This period of time has left some evidence such as city foundations, public and private buildings, a few interesting farms.
At the end of the colonial time, in the excitement of getting free from Portugal, some buildings have been torn down, among them the Governor’s Palace, that could have been used as the Presidential Palace of the new Republic. Most of these buildings have been left for years in a state of neglect and degradation, but now recovering operations are carried on. The most important part of this legacy is in towns, of which the main are: 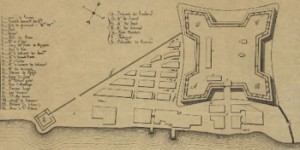 Bissau
Bissau Velho (Old Bissau) is the original centre of the city, right behind the port. It’s made of narrow winding lanes and Colonial style houses. The most interesting is Amura Fortress, where is buried the hero of the revolution Amilcar Cabral; a visit is not possible because it belongs to the Army, but the view from outside is itself impressive.
Bafatá
Guinea Bissau’s second city lies on top of a hill over Rio Gêba ,150 km. east of Bissau. It’s a very quiet town; the historical centre has got many old Portuguese style houses and street lamps. Very pleasant the view from the embankment.
Another attraction is the native house of Amilcar Cabral, near the central market, restored by Unesco in 2011.
Cacheu 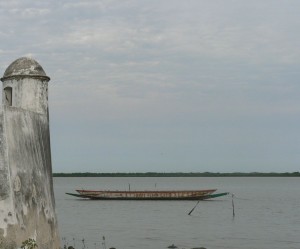 The town of Cacheu is one of the oldest historical sites, and still displays many lovely sceneries. On the river stands a small square fortress of the XVI century. This is the place where Francis Drake and John Hawkins fought against the Portuguese in 1567.
The Fortress has well preserved guns, has been restored in 2004 and more is to be done together with the program for the Memorial of Slavery.
The town of Cacheu is still picturesque, with swarms of birds and wonderful sunsets on the water.
Bolama
This town, that names the island where it lies, was Guinea Bissau’s capital in XIX century, when was contended between the English and the Portuguese for a long time. Today many houses are empty and invaded by weeds, but it still has many memories of the times when it was more important. It’s worth a visit the old, some gothic style, cemetery. 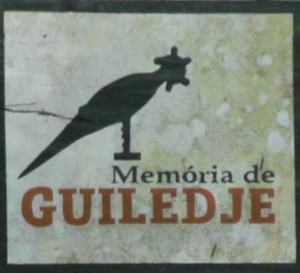 The Memory of Redemption
Fight for independence from Portugal is one of the most active memory elements for Guinea Bissau’s people.
Many are the places where there have been fights; the most meaningful is in the South, near Cantanhez Park, and is the Museum of Guiledje, where the different stages of the fight are explained, and military and ethnographic articles are exhibited.
It’s a very interesting visit because you can hear directly the records of the events from whom who participated (see at the right box GULEDJE).
There are many monuments and plates in memory of the time, as the Pidjiguiti monument which honours the dissident workers fallen in Bissau’s port in 1959. 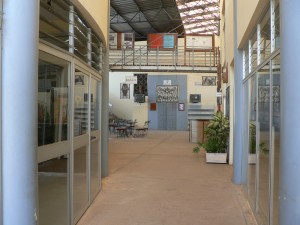 Modern Life
Today, Guinea Bissau is a modern country, with buildings, monuments and places similar to the ones in all the other countries in Africa and in the world. This is especially true of the new constructions and activities in Bissau, but other places too have developed in a similar way, and it is true for all sorts of towns, small or large.
City life is interesting in all of them, especially in and around markets, and especially by the large afternoon market of Gabù, rich in natural products and handicrafts.

How to get there
You can reach all of these places from Bissau with public transportation. To go to Bolama island from Bissau you can rent a boat, otherwise you can cross the estuary by pirogue to Enxude, from here by land to São João, where any boat will take you easily to Bolama.
Instead, it’s possible to reach Guledje only by private means.

Food and Lodging
There are hotels and restaurants almost everywhere, it can be difficult only in some very small town.

Some suggestions of tours can be found in the squares right-side this page.
Personal itineraries can be worked out looking for the addresses indicated in the page. CONTACTS.

Some suggested visits:
THE JOURNEY OF SLAVES

place: Cacheu
vehicle: car
length: half to 1 day
season:all the year
(but better in dry season for going to slaves island)

A memory journey about a sad period in the African history. A moment to reflect together and to learn many unknown aspects.

region: extreme South
vehicle: car
length: 1 or 2 hours
season: all the year
suggested to be visited jointly with Cantanhez

A visit to the Guinea Bissau independence Museum, located into the former barracks of the Portuguese Army.