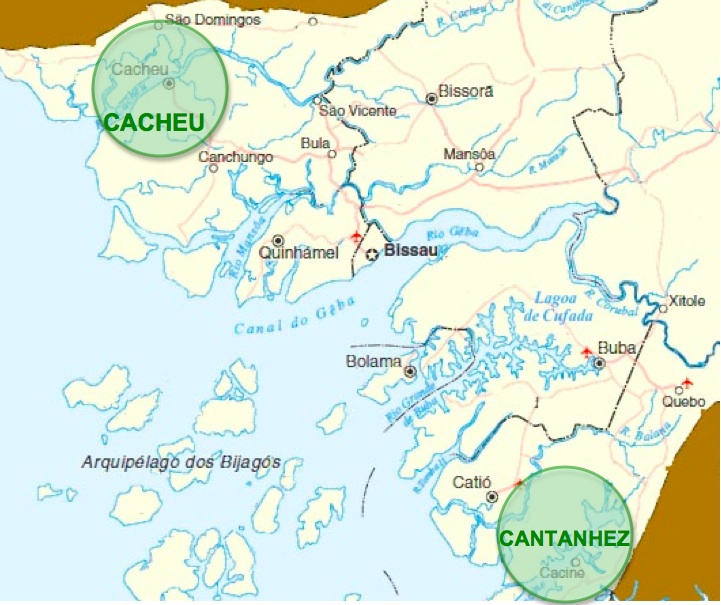 Forests in Guinea Bissau are a patrimony of flora, fauna and tradition.

There you still find “primary forests“, which means never man-cut. It’s identified by having only high-stalked trees; instead, when the forest is cut, it grows again as a “secondary forest”, where along with the previous species grow also shorter trees and even bushes, whose seeds have been brought by animals, birds and men too.
But in Guinea Bissau’s parks also the secondary forest is most often not compromised and contaminated by men’s activities, that’s why animals there are not used to human presence and live mostly far from villages.
For this reason they are more difficult to be seen than in Eastern Africa’s Parks, where they live “almost” like domestic animals, but the ones that you get to see are real wild animals.

There are two Forest Parks to visit, one in Cacheu in the North, and the other in Cantanhez in the south.
They have got different characteristics: Cacheu is interesting mainly for culture and tradition, Cantanhez for nature. 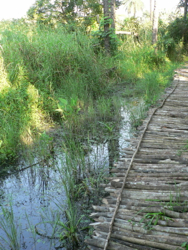 CANTANHEZ FOREST
The forest of Cantanhez is the largest in the whole country and has got a great variety of flora and fauna. It’s located in Tombali district, in southern Guinea Bissau, and comprehends many kinds of plants.
In the dry sections there are many different species of palms and other trees.
But a very large part of the reserve is humid forest, where sweet and salt waters mix and give life to a rich vegetation with mangroves.
Fauna is also very diversified, with more than a hundred species among mammals, fishes and birds.
Especially numerous are buffalos, chimpanzees, macaques, red and black boars.
The Cantanhez area ​​plays a high environmental value, being the last remaining primeval forest still untouched by man. Also for this reason is a preferred corridor for the passage of the great migrations, including that of elephants.

CACHEU FOREST (Mato Sagrado – the holy forest)
About half of the area is formed by the mangroves and sand banks which constitute the Rio Cacheu estuary, a place of the greatest importance for the reproduction of fishes, reptiles, mollusca and shell-fishes. The sand banks house a high number of migratory aquatic birds, such as flamingos, white herons and pelicans, of reptiles such as the Nile crocodile and mammals as the salt water hippopotamus and dolphins.
The other part of the park is constituted by a forest less humid than the one in Cantanhez and mostly of secondary type, that means subjected to heavy deforestation for agricultural purposes. Fauna here is made mostly by gazelles, but it’s possible to meet also monkeys, leopards and hyenas.
What makes this forest so interesting is its being “MATO SAGRADO”, that means a holy area in animistic culture.
The centre of it are the villages of Cobiana, which attract many visitors who go there to attend rituals for the local spirits.
In the village of Elia there are interesting two stories huts.

How to get there, where to stay
From Bissau to Cacheu it takes about one hour and a half for less than 100 km. on a paved road.
Starting points are in Cachungo (30 km. before Cacheu) and in Cacheu, and here in the offices of the Park you can get informations. There are a couple of simple hotels in Cachungo and a few bungalows in Cacheu, in a nice location on the river.
Cantanhez is over 250 km. away, 60 km. aren’t paved and the last 25 very rough. It can take 5-6 hours to get there. You can also reach Cantanhez renting a boat, it lands in Catesse, about 20 km. from the centre of the park; in the rainy season this is the only way to go.
In Cantanhez there are two simple, but good, places where to stay: the Park centre, in Jemberem, and Faro Sadjuma (20 km. before).

Most interesting visits
The most interesting visits are:
- in Cacheu park, the Mato Sagrado and the forest of Cobiana,
- in Cantanhez there are excursions in the different forests of the park, tracking chimpanzees, and the close by island of Melo.
You can find more details for some of the visits in the box at right.
Other visits and custom itineraries can be found by calling or by writing to the address indicated on page CONTACTS

A wonderful park where you can see the greatest mangrove swamp, water & land animals, culture and local traditions.

The greatest forest of the country, the most partnever cut by men, with wild animals, straights, beaches, history and traditional culture

Impressions given by tourists on their visits to the forests

Among the reports we have received, we selected those that appeared the most interesting to be communicated to those who want to visit these places.